Click below to browse our available kittens by color category.

Available Kittens
Interesting Articles
Living Art
We specialize in highly unique, ultra rare and one of a kind Persian coat colors. If you are one of those people that crave originality in life, you have arrived at the right website. We offer an array of designer patterns synchronized with elaborate custom colors. The majority of our kittens are like one of a kind Picasso paintings. We hope you enjoy your visit to our furry purry art gallery.

He's such a shabby chic kind of kitty!!!

She's a keeper!!!!
👉Follow @dollfacepersiankittens to have your #instramfeed decorated with adorable floofie kittens! 🐾 Some of which are available!!!

You may be asking…What is a Teacup Persian Kitten?? Are they real? Where can I get one?

Understanding the “Teacup” terminology in a cyber world that can be playground for unethical people.
Teacup, teacup, teacup! It is an Internet frenzy that has customers flocking to buy and snatch up any kittens with the word “teacup” braided into their description.
This article is dedicated to clarifying the all too popular “Teacup phrase”, which has almost became an Internet  hoax.
The words teacup cat or teacup kittens are being completely distorted on various cat breeders websites so we feel it is time to set the record straight and explaining the facts and myths about them.
~~~~~~~~~~~~~~~~~~~
Fact:  Teacup cats are not anything new in today’s society. The term “Teacup cats” or Teacup kittens” are merely a descriptive term to identify cats that grow no larger than ten pounds at maturity (1 years old).
~~~~~~~~~~~~~~~~~~~~~~~~~~~~~
Fact: Regular sized Persians grow to be between 12 – 16 pounds at maturity (1 one year old)
Some breeders are really stepping into a world of deception by using additional terminology like “Micro & mini“.
This is leading the general public into believe there are cats that will fit inside a teacup full grown or into the palm of your hand.  (See some of the distorted & Photoshop photos below) This is just plain insanity & un-realistic expectations!
We give honest estimates (not guarantees) on all of our kittens for sale based on past breeding’s, parents weights and overall judgement based on each particular kitten. I know myself, I would rather receive honest information and make an educated decision on my purchase rather than sugar coated one and end up feeling deceived.
Teacup cats are equivalent to regular sized women’s clothing verses women’s petite size clothing.
They are proportioned the same but petite women just have smaller bone structure. It is as simple as that. There is no such thing as a cat that fits into the palm of your hand at maturity.
We would like to think that people are intelligent enough to know that photos like the ones below are created on Photoshop as a joke, not real cats! 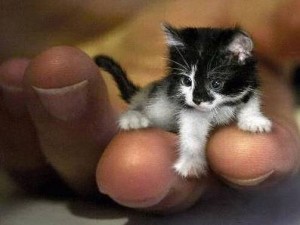 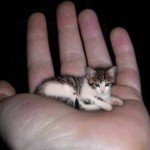 A realistic expectation for a teacup cat is to pictures a 4 or 5 month old regular cat. That is what a teacup cat looks like in reality.
Color Chart Factors
Number one smallest colored Teacups – Without question – Silver & Goldens
Second smallest: Tabby’s
Third smallest: Bi-color Persians including Calicos
Fourth smallest: Solids (Black, blue, red, cream, ect.)
Fifth smallest: Pure Whites and all colored Himalayans
Hopefully this page has put things into perspective for those of you searching for a “Teacup Persian Cat”.

Always remember “Teacup Persians” is a descriptive term, not a size category. 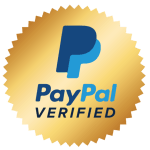